Question 1.
Glucose or sucrose are soluble in water, but cyclohexane or benzene (simple six membered ring compounds) are insoluble in water. Explain.
Solution:
Glucose or sucrose contain several hydroxyl groups in their molecules which form hydrogen bonding with water molecules due to which they dissolve in water. On the other hand compounds like benzene or cyclohexane cannot form hydrogen bonds with water molecules, so they are insoluble in water.
Question 2.
What products are expected when lactose is hydrolysed ?
Solution:
Lactose (C12H22O11) on hydrolysis with dilute acid yields an equimolar mixture of D-glucose and D-galactose. Question 3.
How do you explain the absence of aldehyde group in pentaacetate of glucose ?
Solution:
The cyclic hemiacetal form of glucose contains an OH group at C-1 which gets hydrolysed in the aqueous solution to produce the open chain aldehydic form which then reacts with NH2OH to form the corresponding oxime. Therefore, glucose contains an aldehydic group. On the other hand, when glucose is reacted with acetic anhydride, the OH group at C-1, along with the four other OH groups at C-2, C-3, C-4 and C-6 form a pentaacetate. As the pentaacetate of glucose does not contain a free OH group at C-1, it cannot get hydrolysed in aqueous solution to produce the open chain aldehydic form and thus glucose pentaacetate does not react with NH2OH to form glucose oxime. Hence, glucose pentaacetate does not contain the aldehdye group.
Question 4.
The melting points and solubility in water of amino acids are higher than those of the corresponding haloacids. Explain.
Solution:
The amino acids exist as zwitter ions, H3N+ OHR – COO–. Because of this dipolar salt like character they have strong dipole- dipole attractions. So, their melting points are higher than halo acids which do not have sail like character. Moreover, due to this salt like character, they interact strongly with H2O. Thus, solubility of amino acids in water is higher than that of the corresponding halo acids which do not have salt like character.

Question 5.
Where does the water present in the egg go after boiling the egg.
Solution:
The boiling of an egg is a common example of denaturation of proteins present in the white portion of an egg.

The albumin present in the white of an egg gets coagulated when the egg is boiled hard. The soluble globular protein present in it is denatured resulting in the formation of insoluble fibrous protein.

Question 8.
When RNA is hydrolysed, there is no relationship among the quantities of different bases obtained ? What does this fact suggest about the structure of RNA ?
Solution:
A DNA molecule has two strands in which the four complementary bases pair each other, viz. cytosine (C) always pairs with guanine (G) while thymine (T) always pairs with adenine (A). Therefore, when a DNA molecule is hydrolysed the molar amount of cytosine is always equal to that of guanine and that of adenine is always equal to that of thymine RNA also contains four bases, the first three are same as in DNA but the fourth one is uracil (U).

As in RNA there is no relationship between the quantities of four bases (C, G, A and U) obtained, therefore, the base-pairing principle, viz., (A) pairs with (U) and (C) pairs with (G) is not followed. So, unlike DNA, RNA has a single strand.

Question 1.
What are monosaccharides?
Solution:
A carbohydrate that cannot be hydrolysed further to give simpler unit of polyhydroxy aldehyde or ketone is called a monosaccharide. With a few exceptions they have general formula, C,,H2„O„. About 20 monosaccharides are known to occur in nature. Some common examples are glucose, fructose, ribose, etc.

Question 6.
What is glycogen? How is it different from starch ?
Solution:
The carbohydrates are stored in animal body as glycogen. It is also known as animal starch because its structure is similar to amylopectin. It is present in liver, muscles and brain. When the body needs glucose, enzymes break the glycogen down to glucose. Glycogen is also found in yeast and fungi.

Starch is the main storage polysaccharide of plants. It is the most important dietary source for human being. High content of starch is found in cereals, roots, tubers and some vegetables. It is a polymer of two components-amylose (15-20%) which is water soluble and amylopectin(80-85%) which is water insoluble.

Question 7.
What are the hydrolysis products of (i) sucrose and (ii) lactose ?
Solution:

Question 9.
What happens when D-glucose is treated with the following reagents? (i) Though it contains the aldehyde (-CHO) group, glucose does not give

2,4-DNP test, Schiff’s test and it does not form the hydrogen sulphite addition product with NaHSO3.

(ii) The pentaacetate of glucose does not T react with hydroxylamine (NH2OH) to form ’ the oxime indicating the absence of free -CHO group.

(iii) The formation of two anomeric methyl glycosides by glucose on reaction with CH3OH and dry HCl can be explained in terms of the cyclic structure. The equilibrium mixture of a-and (3-glucose react separately with methanol in the presence of dry HCl gas to form the corresponding methyl D-glucosides. These pentaacetates donot have a free -OH group at C1 and hence are not hydrolysed in aqueous solution to produce the open chain aldehyde form and hence do not react with NH2OH to form glucose oxime.

(v) The existence of glucose in two crystalline forms termed as a and β-D-glucose can again be explained on the basis of cyclic structure of glucose and not by its open chain structure. It was proposed that one of the -OH groups may add to – CHO group and form a cyclic hemiacetal structure. It was found that glucose forms a 6-membered ring in which -OH at C – 5 is involved in ring formation. This explains the absence of -CHO group and also existence of glucose in two forms as shown below. These two forms exist in equilibrium with open chain structure. Question 12.
Define the following as related to proteins

Solution:
(i) Peptide Linkage : Proteins are the polymers of a-amino acids which are connected to each other by peptide bond or peptide linkage. Chemically, peptide linkage is an amide formed between -COOH group and -NH2 group. The reaction between two molecules of similar or different amino acids, proceeds through the combination of the amino group of one molecule with the carboxyl group of the other. This results in the elimination of a water molecule and formation of a peptide bond -CO-NH-. The product of the reaction is called a dipeptide because it is made up of two amino acids. For example, when carboxyl group of glycine combines with the amino group of alanine we get a dipeptide, glycylalanine.

(iii) Denaturation : Protein found in a biological system with a unique three-dimensional structure and biological activity is called a native protein. When a protein in its native form, is subjected to physical change like change in temperature or chemical change in pH, the hydrogen bonds are disturbed. Due to this, globules unfold and helix get uncoiled and protein loses its biological activity. This is called denaturation of protein. During denaturation 2° and 3° structures are destroyed but 1° structure remains intact. The coagulation of egg white on boiling is a common example of denaturation. Another example is curdling of milk which is caused due to the formation of lactic acid by the bacteria present in milk. Question 14.
What type of bonding helps in stabilising the α-helix structure of proteins?
Solution:
α-Helix is one of the most common ways in which a polypeptide chain forms all possible hydrogen bonds by twisting into a right handed screw (helix) with the -NH group of each amino acid residue hydrogen bonded to the >C = O of an adjacent turn of the helix. Question 17.
What are enzymes?
Solution:
Life is possible due to the coordination of various chemical processes in living organisms. An example is the digestion of food, absorption of appropriate molecules and ultimately production of energy. This process involves a sequence of reactions and all these reactions occur in the body under very mild conditions. This occurs with the help of certain biocatalysts called enzymes. Almost all the enzymes are globular proteins. Enzymes are specific for a particular reaction and for a particular substrate. They are generally named after the compound or class of compounds upon which they work. For example, the enzyme that catalyses hydrolysis of maltose into glucose is named as maltose.

Question 18.
What is the effect of denaturation on the structure of proteins?
Solution:
Proteins are very sensitive to the action of heat, mineral acids, alkalies etc. On heating or on treatment with mineral acids, soluble forms of proteins such as globular proteins often undergo coagulation or precipitation to give fibrous proteins which are insoluble in water. This coagulation also results in the loss of the biological activity of the protein. That is why the coagulated proteins so formed are called denatured proteins.. Chemically, denaturation does not change the primary structure but brings about changes in the secondary and tertiary structure of proteins.

Question 19.
How are vitamins classified? Name the vitamin responsible for the coagulation of blood.
Solution:
Vitamins are classified into two groups depending upon their solubility in water or fat.
(i) Fat soluble vitamins : Vitamins which are soluble in fats and oils but insoluble in water are kept in this group. These are vitamins A, D, E and K. They are stored in liver and adipose (fat storing) tissues.
(ii) Water soluble vitamins : B group vitamins and vitamin C are soluble in water so they are grouped together. Water soluble vitamins must be supplied regularly in diet
because they are readily excreted in urine and cannot be stored (except vitamin B12) in our body.
Vitamin K is responsible for coagulation of blood.

Question 20.
Why are vitamin A and vitamin C essential to us? Give their important sources.
Solution:
Deficiency of vitamin A causes Xerophthalmia (hardening of cornea of the eye) and night blindness. So its use is essential to us. It is available in fish liver oil, carrots, butter and milk. It promotes growth and increases resistance to diseases. Vitamin C is very essential to us because its deficiency causes Scurvy (bleeding of gums) and pyorrhea (loosening and bleeding of teeth). Vitamin C increases resistance of the body towards diseases. Maintains healthy skin and helps cuts and abrasions to heat properly. It is soluble in water. It is present in citrus fruits, e.g.,oranges, lemons, amla, tomato. green vegetables (Cabbage) chillies, sprou pulses and germinated grains.

Question 22.
What is the difference between a nucleoside and a nucleotide?
Solution:
Nucleoside : A nucleoside contains only two basic components of nucleic acids, i.e., a pentose sugar and a nitrogenous base. It may be represented as Sugar-base. Depending upon the type of sugar present, nucleosides are of two types :

Nucleotides : A nucleotide contains all the three basic components of nucleic acids, i.e., a phosphoric acid group, a pentose sugar and a nitrogenous base. In other words, nucleotides are nucleoside monophosphates.

Depending upon the type of sugar present, nucleotides like nucleosides are of two types : 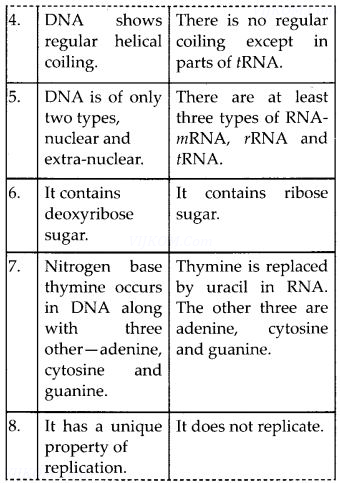 Question 25.
What are the different types of RNA found in the cell?
Solution:
RNA molecules are of three types and they perform different functions. They are named as messenger RNA (m-RNA), ribosomal RNA (r-RNA) and transfer RNA (t-RNA).