Free PDF download of Important Questions with Answers for CBSE Class 10 Maths Chapter 3 – Pair of Linear Equations in Two Variables prepared by expert Maths teachers from latest edition of CBSE(NCERT) books only by CoolGyan to score more marks in CBSE board examination.

Again, Three years hence, Age of Aftab = x + 3 and Age of his daughter = y + 3
According to the given condition,

Thus, the given conditions can be algebraically represented as:
x – 7y = –42

x = –42 + 7y
Three solutions of this equation can be written in a table as follows:

x = 6 + 3y
Three solutions of this equation can be written in a table as follows:

The graphical representation is as follows: Concept insight: In order to represent the algebraic equations graphically the solution set of equations must be taken as whole numbers only for the accuracy. Graph of the two linear equations will be represented by a straight line.

For equation x – y = –4, we have following points which lie on the line

We plot the points for both of the equations to find the solution. 3. On comparing the ratios

Hence, lines are parallel to each other.

4. Given the linear equation (2x+3y – 8=0), write another linear equation in two variables such that the geometrical representation of the pair so formed is:
(i) Intersecting lines
(ii) Parallel lines
(iii) Coincident lines
Ans. (i) Let the second line be equal to a2x+b2y+c2=0
Comparing given line 2x+3y – 8=0 with a1x+b1y+c1=0,
We geta1=2,b1=3 and c1=−8
Two lines intersect with each other if

So, second equation can be x+2y=3 because

… (1)
According to the question

8. Draw the graphs of the equations

Three solutions of this equation can be written in a table as follows: It can be observed that the required triangle is

Ans. We know that the sum of the measures of opposite angles in a cyclic quadrilateral is 180°.

Substituting the value of

10. Draw graphs of the equations on the same graph paper 2x + 3y = 12, x – y = 1. Find the area and co-ordinate of the vertices of the triangle formed by the two straight lines and the y-axis.
Ans. 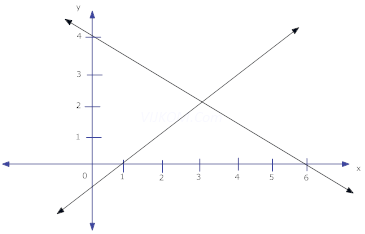 12. The sum of a two-digit number and the number obtained by reversing the order of digits is 99. If the digits differ by 3, find the number.
Ans.

13. In a cyclic quadrilateral ABCD, 14. A two-digit number is obtained by either multiplying the sum of the digits by 8 and adding 1 or by multiplying number. How many such numbers are there?
Ans. 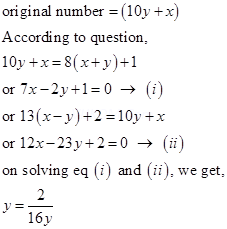 16. If 2 is added to the numerator of a fraction, it reduces to

and if 1 is subtracted from the denominator, it reduces to 22. Determine graphically the coordinates of the vertices of the triangle, the equation of whose sides are y = x, 3y = x and x + y = 8.
Ans. 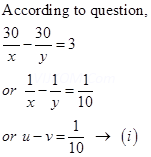 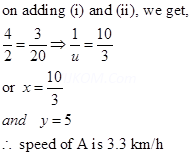