CoolGyan provides you Free PDF download of NCERT Solutions for Class 12 Physics Chapter 2 – Electrostatic Potential and Capacitance solved by Expert Teachers as per NCERT (CBSE) Book guidelines. All Chapter 2 – Electrostatic Potential and Capacitance Exercise Questions with Solutions to help you to revise complete Syllabus and Score More marks. Download CoolGyan NCERT Book Solution to get a better understanding of all the exercises questions., you can download the materials for free in PDF format.
Revision Notes Class 12 Physics
NCERT Solutions Class 12 Physics Question 4.
A spherical conductor of radius 12 cm has a charge of 1.6 × 10-7 C distributed uniformly on its surface. What is the electric field
(a) inside the sphere
(b) just outside the sphere
(c) at a point 18 cm from the centre of the sphere?
Solution: Question 7.
Three capacitors of capacitances 2 μF, 3 μF and 4 μF are connected in parallel. Question 9.
Explain what would happen if in the capacitor given in above question, a 3 mm thick mica sheet (of dielectric constant = 6) were inserted between the plates.
(a) While the voltage supply remained connected.
(b) After the supply was disconnected.
Solution: 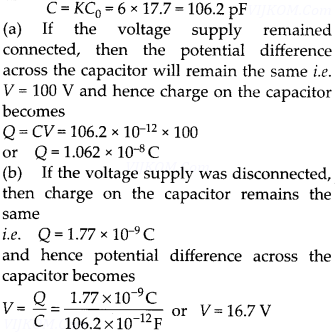 Question 10.
A 12 μF capacitor is connected to a 50 V battery. How much electrostatic energy is stored in the capacitor? Solution:

Question 11.
A 600 μF capacitor is charged by a 200 V supply. It is then disconnected from the supply and is connected to another uncharged 600 μF capacitor. How much electrostatic energy is lost in the process? Solution: Question 13.
A cube of side b has a charge q at each of its vertices. Determine the potential and electric field due to this charge array at the centre of the cube. Solution:
The length of diagonal of the cube of each side b is E = 0, as electric field at centre due to a charge at any corner of cube is just equal and opposite to that of another charge at diagonally opposite corner of cube.
Question 14.
Two tiny spheres carrying charges 1.5 μC and 2.5 μC are located 30 cm apart. Find the potential and electric field:
(a) at the mid-point of the line joining the two charges, and
(b) at a point 10 cm from this midpoint in a plane normal to the line and passing through the mid-point.
Solution:
(a) At mid point C of line joining two charges, electric potential is Vc = VCA + VCB Question 16.
Show that the normal component of electrostatic field has a discontinuity from one side of a charged surface to another given by

where n is a unit vector normal eo to the surface at a point and o is the surface charge density at that point. (The direction of n is from side 1 to side 2). Hence show that just
outside a conductor, the electric field is

.
(b) Show that the tangential component of electrostatic field is continuous from one side of a charged surface to another. Solution:
Normal component of eDctric field intensity due to a thin infinite plane sheet of The electric flux through the end faces of the cylindrical Gaussian surface is zero, as E is parallel to them. According to Gauss’s Question 19.
If one of the two electrons of a H2 molecule is removed, we get a hydrogen molecular ion

. In the ground state of an with zero potential energy at infinity.
Question 20.
TWO charged conducting spheres of radii a and b are connected to each other by a wire. What is the ratio of electric fields at the surfaces of the two spheres? Use the result obtained to explain why charge density on the sharp and pointed ends of a conductor is higher than on its flatter portions. Solution:
As the two spheres are connected to each other by wire, so they have same electric potential i.e.,Va = Vb if b > a, then Ea > Eb
i.e. sphere with smaller radius produces more electric field on its surface. Hence, the charge density on the sharp and pointed ends of conductor is higher than on its flatter portions.
Question 21.
Two charges -q and +q are located at points (0,0, -a) and (0,0, a), respectively.
(a) What is the electrostatic potential at the points (0,0, z) and (x, y, 0)?
(b) Obtain the dependence of potential on the distance r of a point from the origin when r/a »1.
(c) How much work is done in moving a small test charge from the point (5, 0, 0) to (-7, 0, 0) along the x-axis? Does the
answer change if the path of the test charge between the some points is not along the x-axis? Solution:
(a) The two point charges form an electric dipole of moment p = q 2a directed along + z-axis. Point A (0, 0, z) lies on the axis of electric dipole, so electric potential at point A is (c) As both the points C (5, 0, 0) and D (-7, 0, 0) lie on the perpendicular bisector of electric dipole, so electric potential at both the points is zero. Hence work done in moving the charge from C to D is
WCD = q0 [VD – VC] × O or WCD = O
This work done will remain equal to zero even if the path of the test charge between the same points is changed, as electric field is conservative field and work done in moving a charge between the two points in electric field is independent of the path chosen to move the charge.
Question 22.
Figure shows a charge array known as an electric quadrupole. For a point on the axis of quadrupole, obtain the dependence of potential on r for r/a >> 1, and contrast your results with that due to an electric dipole, and an electric monopole (i.e., a single charge). Question 24.
What is the area of the plates of a 2 F parallel plate capacitor, given that the separation between the plates is 0.5 cm? Solution:

Question 25.
Obtain the equivalent capacitance of the network in figure. For a 300 V supply, determine the charge and voltage across each capacitor. Question 26.
The plates of a parallel plate capacitor have an area of 90 cm2 eacn and are separated by 2.5 mm.The capacitor is charged by connecting it to a 400 V supply
(a) How much electrostatic energy is stored by the capacitor?
(b) View this energy as stored in the electro-static field between the plates, and obtain the energy per unit volume u. Hence arrive at a relation between u and the magnitude of electric field E between the plates. Solution: Question 27.
A 4 μF capacitor is charged by a 200 V supply. It is then disconnected from the supply, and is connected to another uncharged 2 μF capacitor. How much electrostatic energy of the first capacitor is lost in the form of heat and electromagnetic radiation? Solution: Question 28.
Show that the force on each plate of a parallel plate capacitor has magnitude equal to

QE, where Q is the charge on the capacitor, and E is the magnitude of electric field between the plates. Explain the origin of the factor

. Solution:
Magnitude of electric field between the
plates of charged capacitor is

However, magnitude of electric field of one plate or! the other plate of charged capacitor is

So, force on the one plate of charged capacitor due to the other is Here C > C0, because a single conductor A can be charged to a electric potential till it reaches the breakdown value of surroundings. But when another earthed metallic conductor B is ; brought near it, negative charge induced on it decreases the electric potential on A, hence more charge can not be stored on A.
Question 31.
Answer carefully:

Question 32.
A cylindrical capacitor has two co-axial cylinders of length 15 cm and radii 1.5 cm and 1.4 cm. The outer cylinder is earthed and the inner cylinder is given a charge of 3.5 μC. Determine the capacitance of the system and the potential of the inner cylinder. Neglect end effects (i.e. bending of the field lines at the ends). Solution: Question 33.
A parallel plate capacitor is to be designed with a voltage rating 1 kV, using a material of dielectric constant 3 and dielectric strength about 107 V m-1. For safety, we should like the field never to exceed, say 10% of the dielectric strength. What minimum area of the plates is required to have a capacitance of 50 μF? Solution: Question 35.
In a Van-de-Graff type generator, a spherical metal shell is to be a 15 × 106 V electrode. The dielectric strength of the gas surrounding the electrode is 5 × 107 V m1. What is the minimum radius of the spherical shell required? Solution: Question 36.
A small sphere of radius r1 and charge q1 is enclosed by a spherical shell of radius r2 and charge q2. Show that if q: is positive, charge will necessary flow from the sphere to the shell (when the two are connected by a wire) no matter what the charge q2 on the shell is. Solution:
The potential on inner small sphere is VA